SSAC 14: What does it take to call a strike?

Posted on March 9, 2014 by roughlynormal

Have you ever thought that umpires are a bit too willing to call strikes when the count is 3-0?  Or, perhaps, you’ve noticed that umpires rarely call strikes when the count is 0-2?  In this very clear paper,  Etan Green and David Daniels  from Stanford University use Pitch f/x data to answer questions about how the  count (number of balls and strikes against a batter) help predict the chances that an umpire calls a ball/strike on the next pitch.

I was impressed with how the researchers wrote and presented so that everybody can understand their work.  This paper is easy to understand and share with students in high-school, in my opinion.  It simply takes a baseline understanding of the rules of baseball, basic probability ideas, and reading three-dimensional graphs.

How are umpires biased?

Is this isolated to a subset of umpires?

Let’s look at the 50% contour line of calling

a strike overall, When looking at pitches after 2 strikes,  this contour contracts.  The area between these contours is called a “band of reversal:”  We found  a lack of bias emerging for pitches called after a ball.  But the ENTIRE distribution of strike thresholds is above zero for pitches after two strikes.  IN short, EVERY UMPIRE IS BIASED. 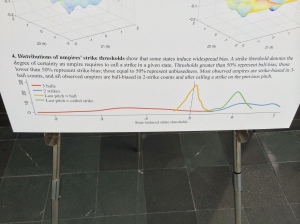 I have been a math/statistics teacher for 25 years. I currently teach at an independent school in southern California. I also coach teaching fellows for Math for America - Los Angeles chapter. I love my career, my colleagues, and my friends & family.
View all posts by roughlynormal →
This entry was posted in Uncategorized and tagged balls and strikes, baseball, David Daniels, research project, sports analytics, Stanford University. Bookmark the permalink.